Walter Bender with Steve Jobs at MIT in 1982

Walter Bender has had a remarkable career. He is perhaps best known for his role leading the groundbreaking initiative One Laptop per Child, as well as developing the free/libre operating system to drive those laptops. And in so doing, changing the lives of millions of the world’s poorest children.

Bender describes himself as a mathematician, artist, technologist, philanthropist, and entrepreneur. He is both an artist and mathematician first, he says, because that’s what he studied as an undergraduate at Harvard, taking a particular interest in lithography and abstract algebra. But it was his study of art that led him into a career in tech. Because of the project he was doing with xerography, he regularly snuck onto the MIT campus to use their color Xerox machines (which had no “key operator”⸺in other words, they were free). Once he started hanging out at MIT, he decided to stay, first for a graduate degree and then a career as a research scientist.

At MIT, he joined The Architecture Machine Group, working with Jerome B. Wiesner and Nicholas Negroponte, as they developed the concept that would become the Media Lab. Wiesner described their shared focus as “technology in support of learning and expressing by people and machines.” Later, Walter served as Executive Director of the Media Lab. 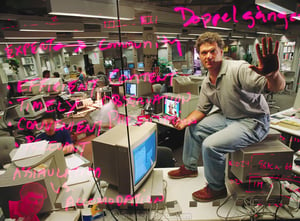 At MIT, he joined The Architecture Machine Group, working with Jerome B. Wiesner and Nicholas Negroponte, as they developed the concept that would become the Media Lab. Wiesner described their shared focus as “technology in support of learning and expressing by people and machines.” Later, Walter served as Executive Director of the Media Lab.

Much of Walter’s early career was engineering-focused: he has multiple patents in signal processing, image processing, and steganography. His other focus was in pioneering the field of personalized media. The latter work eventually led to his trying to give a voice to underserved populations: senior citizens and children. By the new millennium, under the influence of Marvin Minsky and Seymour Papert, Walter devoted much of his career to the impact of technology on learning, with a focus on children. In 2006, he took a leave from MIT to co-found the groundbreaking initiative, One Laptop per Child, as a vehicle to bring 40 years of MIT research to a global scale.

Unsatisfied with just providing hardware, he took the mission a step further. He founded the non-profit foundation, Sugar Labs, an all-volunteer-driven organization where he still actively serves as a software developer and board member. Sugar Labs develops and maintains a software platform called Sugar. Sugar features “constructionist” tools, activities, and games that improve students’ math skills, spatial relations, memory, speech, writing, and more. Most importantly, Sugar itself is manipulatable. Students can “recode” their own iterations of all its games within the software itself. In the process, students have the ability to shape how they are learning and teach themselves how to learn better.

Sugar Labs and One Laptop per Child are global programs. But Walter’s efforts to improve the learning process itself has a special focus in Japan. Though not a musician, Walter has a passion for music that goes beyond fandom. He wrote a programming language, Music Blocks, that melds concepts from music theory and practice, mathematics, and computer science. Together with partners in Japan, he is deploying Music Blocks in elementary schools throughout the country as part of a Japanese government program to enhance STEM (science, technology, engineering, and mathematics) education. Walter sees a deep synergy between music and mathematics that is both engaging and challenging, what Minsky called “hard fun”. 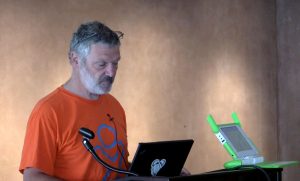 Walter joined Sorcero as a Chief Learning Officer and Chief Learning Architect for the same reason that he founded Sugar Labs and brought his passions for music to Japan: to help people better learn through technology.  Sorcero’s functionality feels simple, but only as a result of backend complexity that is difficult for most users to comprehend.

Sorcero’s foundation is natural language processing in the truest sense, the kind that makes technology more intelligible, not less. Artificial intelligence-based advancements are not fated to end in dystopia. By guiding and feeding the intelligence of users, solutions like Sorcero offer the promise to strengthen human cognition, not replace it with silicon. Walter joined Sorcero because its strong team is building a business on a noble foundation: to enable machines and humans to become partners by letting them learn from each other.

What can you and your team accomplish if you used machines to augment your expertise? What can AI in action do for your enterprise? Contact us to explore the possibilities.